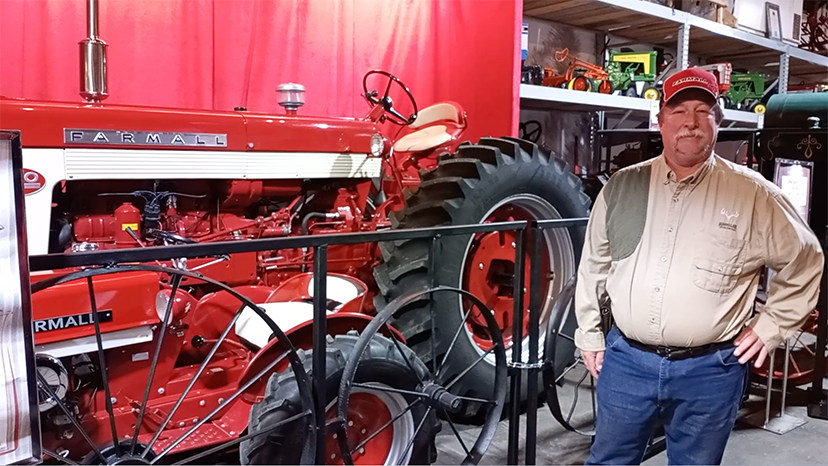 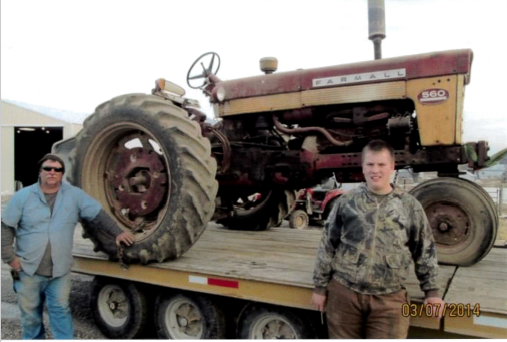 Make of Tractor: Farmall 360
Make Year: 1959
Drawbar/HP Pully Horsepower: 72 Horsepower
Motor: N/A
Serial Number: N/A
Description: This 1959 gas powered Farmall 560 and half-scale 560 replica is owned by Harlan Hacker of Perryville, MO who is a member of the River Hills Antique Tractor Club. The full sized 560 has been in the Hacker family since Harlan’s father, Harry, purchased the tractor new. The 72 HP tractor had formerly been used by this father for crop farming and hay making on the family farm. Harlan remembers spending many days on the tractor when he was growing up and says that he “always like the sound of it when it was pulling.” After his father’s death in 2010, Harlan purchased the tractor from his mother, Helen Hacker, and decided he would have it restored. With tractor restorers, JD Brune and Charlie Scheffer on the case, the tractor was restored to its former beauty and running condition. Now the tractor leads an easy life, pulling an occasional load of hay and being driven in parades. The smaller 560 replica was purchased by Harlan in 2017 from central Illinois. The mini tractor wad designed from a 12 HP Cub Cadet riding lawn mower and had added inclusive details such as mini weights on the front and a smokestack on the hood. When Harlan saw the half-scale tractor for sale, he immediately knew that he wanted to add it to his collection. Later, Harlan was able to purchase a half-scale wagon for the tractor as well. Harlan and his wife, Lisa, enjoy driving the replica 560 in local parades.